Living, Loving, and Learning Together

George vs. George: The American Revolution As Seen from Both Sides 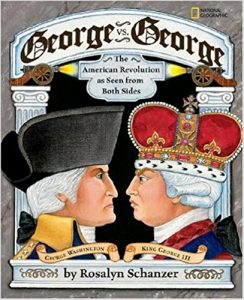 George vs. George: The American Revolution
As Seen from Both Sides
“There are two sides to every story. Rosalyn Schanzer’s engaging and wonderfully illustrated book brings to life both sides of the American Revolution.
The narrative introduces anew the two enemies, both named George: George Washington, the man who freed the American colonies from the British, and George III, the British king who lost them. Two leaders on different sides of the Atlantic, yet with more in common than we sometimes acknowledge. We are lead through their story, and the story of their times, and see both sides of the arguments that divided the colonies from the Kingdom. Was King George a “Royal Brute” as American patriots claimed? Or was he, as others believed, “the father of the people?” Was George Washington a scurrilous traitor, as all the king’s supporters claimed? Or should we remember and celebrate him as “the father of his country?” Who was right? History teaches us that there are two sides to every story…”

There are no reviews yet.

Be the first to review “George vs. George: The American Revolution As Seen from Both Sides” Cancel reply