Living, Loving, and Learning Together

The Great Railroad Race: The Diary of Libby West 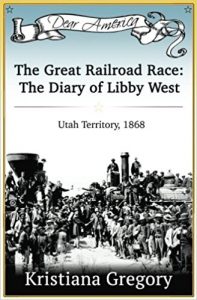 The Great Railroad Race: The Diary of Libby West,
Utah Territory 1868 (Dear America)
“As the daughter of a newspaper reporter, fourteen-year-old Libby keeps a diary account of the exciting events surrounding her during the building of the railroad in the West in 1868.  “May 5, 1869 “Late this afternoon our track-layers arrived at the Summit! The Union Pacific engine came to a stop with a loud release of steam. Facing it, on another sidetrack, was California’s locomotive. Both engines greeted each other with a sharp whistle. “Finally. It was the first time the trains from the Pacific coast and the Atlantic coast had met, and I saw it with my own eyes! We cheered with excitement, men threw their hats in the air, ladies waved handkerchiefs, and Joe ran wild with some other boys … “Everyone is still waiting for Mr. Durant and the others to arrive. Then workers will lay the final half mile — that’s just about 2,500 feet.”

There are no reviews yet.

Be the first to review “The Great Railroad Race: The Diary of Libby West” Cancel reply